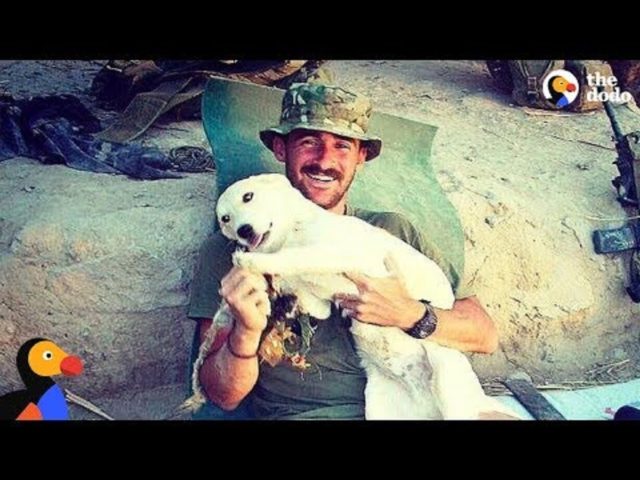 Dogs are man’s best buddy. They can cheer you up when you are down in the dumps or in a stressful situation because of work. They pick you up and love you with all their heart. The same thing happened when a marine spotted a dog named Fred.

Craig, a U.S Marine was poking around the place after defending themselves from their enemies in Afghanistan. He was exploring the area while still being careful of the surroundings as he needs to be fully aware of ambushes so he has to be extra cautious with checking.

Not until he spotted a funny little dog. It was the first time he saw Fred in the middle of the war. He was lying down and covered with dust and dirt from all the commotion in the area. He’s also surrounded with bugs. Back then, he was also feeling hot and hungry.

So, Craig walked over to him slowly as he didn’t want to startle the dog. He began doubting. He wasn’t sure if this dog knows how to interact with a person. After he walked a few steps, Fred started wagging his tail. That’s where Craig immediately stopped.

Right away, he knew that this dog was a little tad different. But this is where he immediately fell in love with Fred. Unfortunately, he was going back home soon. He tried to lure the dog to come to him, but Fred was confused and reluctant.

So, the day came when Craig finally had to leave. He was heading for the helicopter until something poke his heel. He was confused at first, so he looked down and there he was – Fred was there even though he’s terrified.

It was too risky to bring Fred home. If he got caught, he would be euthanized. But Craig came up with a plan and with the help from a lot of friends. They got him on the plane and set him home. It was a long journey for Fred, but it was worth it.

Now, he lives a much different life. Every morning, they would run around the forests and hills. They would go to the beach to swim or play. Fred loves the beach. Even Craig lives a different life now – he now has a pup who’s always around to cheer him up.

Watch this inspiring video about a marine rescuing a dog: