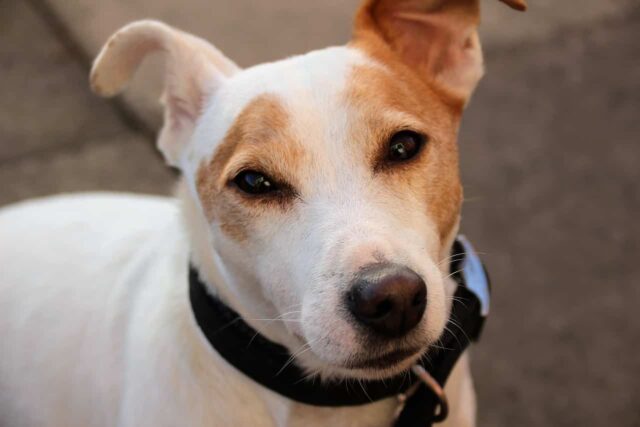 It is not a surprise that dogs do some of the darndest things. They are adorably oblivious to the shenanigans that they cause. And their cluelessness is what makes them the perfect family pet — providing hours of wholesome entertainment for the whole family.

The tiny dog in the featured video below is no exception when it comes to cluelessness. If you are really wondering why that is so, then you are in the right place. So sit back and we’ll show you a video that will both shock you and at the same time leave you in stitches.

The video happened on the 27th of April, 2021 in Ho Chi Minh City, Vietnam. The clip is that of a security camera installed in a family’s garage. For the first few seconds, the video seems to be uneventful. But a couple of seconds later, a tiny white animal can be seen moving around behind the closed door.

A little further into the video, the door begins to move. The white animal seems to be pushing the door open, trying to get in. As it turns out, the white animal is the family’s dog who has been out playing in their yard.

The dog tries his hardest to push the door open. Until finally, the door cracks open just enough for the fluffball to squeeze through. But he isn’t done yet. Like a bowling ball, the tiny dog barrels through the garage and towards the glass door.

The dog runs through the opening below the door at top speed and clips the door on his back with such force that he knocks the entire door down. He didn’t even huff and puff yet he brought the door down all by his tiny self.

The door falls to the floor as it hit the front of the parked car on its way down. Luckily, no one, including the dog, was hurt during the incident and the glass didn’t shatter into sharp pieces.

The homeowners could only gasp in disbelief as they come to check what caused the commotion. It even took three of them to move the door away to a safe place! The dog must have super strength to topple it so easily.