Home Dog Edge People Get Free Hugs From A Very Friendly And Popular Dog In... 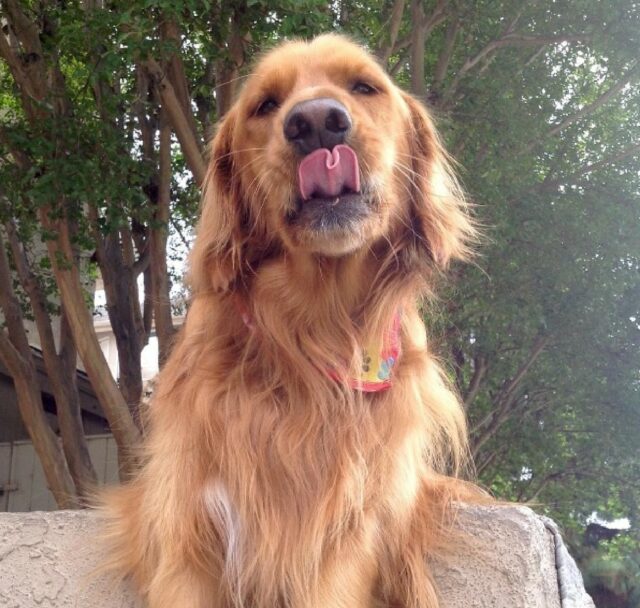 A woman named Wendy Walden was unaware that the Golden Retriever she brought back from Big Bear, California would become so beloved. This dog is Riley.

Riley the Golden Retriever, popularly recognized as the area’s friendliest dog, won the hearts of pedestrians with his charming disposition and adorable grin. Riley discovered a way to interact with the people passing by even if he was surrounded by a wall. He found a way to hang out over the wall, supported by a box, and greet everyone who walks by.

Wendy was unaware of Riley’s increased popularity as a result of his frequent watching over the wall. People routinely greet the dog, taking selfies with him before giving him a well-deserved pet. Riley delighted in the limelight, even engaging in his own ridiculous actions to make new friends.

Riley invented the ball-drop strategy by gently tossing his tennis ball over the wall as someone approached. Generally, this works, and Riley enjoys any attention he can receive. Everyone on their street adores and satisfies the dog’s continuous demand for hugs, kisses, and attention.

Even the baristas at the local Starbucks coffee shop are friendly to the dog. They would pack refreshments in a paper bag for him to carry.

Riley’s family is rather surprised that their dog’s friendly disposition has won the hearts of so many people.

Every individual who has approached him has received a delicate yet welcoming embrace. When they attempted to pull away, Riley would strive to tighten his grip, refusing to let go quickly. His legendary hugs further endeared him to his loving fans and strengthened his popularity not just in their area but also online.

Wendy enjoys perusing Riley’s online photographs and reading how others had fallen in love with her pet. Riley is just being his genuine self, spreading positive energies to everyone he encountered in an effort to brighten their day.