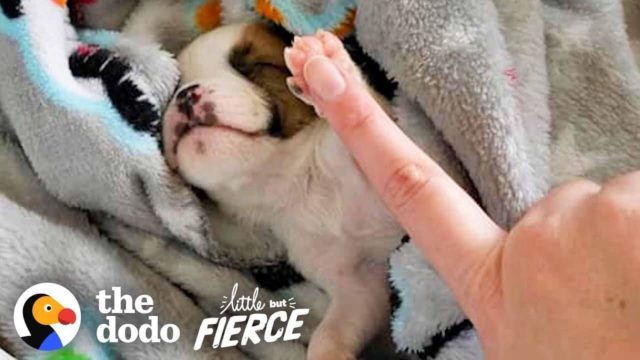 Dogs are like us humans. They also have emotions that define them. We see this dog overcoming his condition with determination and being the healthiest, spunkiest dog! His name is Donovan.

Overnight, he developed a severe head tilt. Instead of it being straight, it was in its side. He couldn’t stop spinning because of his condition. His breeder wants to get help for him.

Joey and Kristina, his foster parents decided to foster Donovan. When they saw him, they just couldn’t believe it because he was so tiny! Joey was too scared even to hold Donovan in his arms.

The head tilt condition is infamous with hydrocephalus. It was so heart-breaking to see him want to do normal puppy things – and to fall over as a result.

They even took him to a specialist saying, “Don’t get attached.” and they were like, “Uh, yeah, that’s too, too late!”

They were too worried for him, nursing him 24/7! But sometimes, they do some muscle memory exercises to make him tilt his head the other way. They started on the medications to stop the water build up in his head.

“Oh, he wanted to start walking.”

Every day, it was like that. One day, they couldn’t believe it when the time Kristina was playing with him, he started growling! He now began to growl. Then there was this time where Donovan would grab a toy and pull it around.

You could see it in him that he had the guts or will that nothing is going to stop him from being a normal dog. He would end up sleeping and then wake up, and then he’d be a spitfire.

They have tiny stairs where he used to go up when he was eight weeks old. They have fosters that are fully grown but won’t even use the stairs. Joey remembered that when he was working, he heard a bowl jangling. His bowl was flipped over and hockey-plucking it around the yard. You can now see the progress!

When they were at the 6-month old mark, they explored to talk about adoption. Then they quickly found the perfect family for Donovan. Josh and Jessica, Donovan’s new parents. The second they met him; it was precisely what they were supposed to be doing because they had just lost their bulldog, Chubby.

If it weren’t for the loss they experienced, they wouldn’t have found Donovan. After he came right in, he made himself at home and felt happy being a part of the family.

Watch this inspiring video about Donovan and his perfect family: