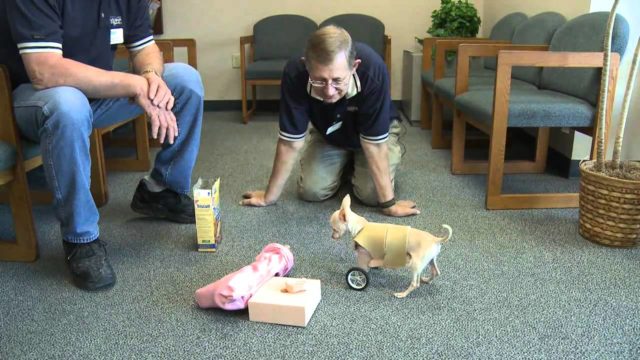 A dog from Wichita finally gets its artificial legs and it’s more than happy now. Josie, a chihuahua, was born without her two front legs along with her 4 siblings. One of her siblings is missing 2 legs like her, while the other two only has three legs.

She’s been living with her two front legs her whole life and has been dealing with it pretty fine. But it’s kind of worrying considering that she is going around with only two legs, with her chest scratching the ground. So doctors decided to give her prosthetic legs, the kind with wheels to make her move freely easier.

Mike Lukens, a prosthetist along with Dennis Byers, a senior technician, made Josie a wheel that will serve as her two legs. They took a cast and made a mold and did a lot of trial and error until they are able to make the best wheels that fit Josie’s little body.

Before coming up with the perfect legs, they made one that became too close together that Josie tips over, it also was too low that her back bents unnaturally. Another one was too far back or too far front but eventually, after several tries, the prosthetics finally fit Josie well.

Even with those trial and errors, Josie showed her desire of being active and the will to walk around freely. It took a lot of time for her to master her new “legs” but by the looks of it, she looks pretty happy about it. According to her owner, Jill Schuldt, with those artificial legs, Josie seems happier now as she gets around. Josie can also now freely run around their home and chase their cat.

Even though Josie has lived here all her life with only two legs, she still strives to live a normal life. She was able to adjust to all of her surroundings. With her living with two legs and the desire of embracing it, people figured out that she deserves something better. Thanks to the people around her that supports her as much as she supports herself.