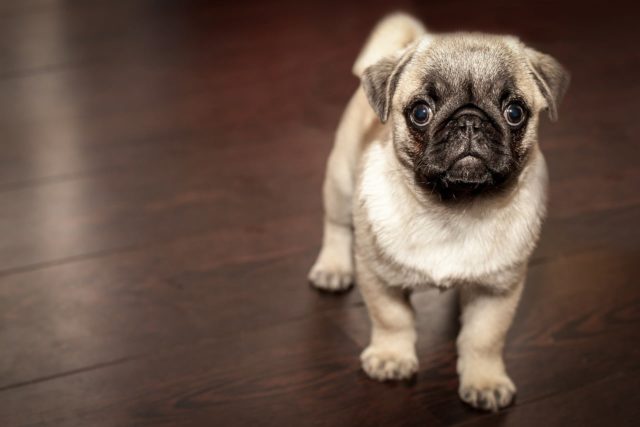 Pugs are known to be playful, intelligent, and comical dogs that love to be the center of attraction in any home. Their willful and stubborn temperament, however, makes it hard to train them and teach them some tricks.

Those who succeed in training their pugs, however, are in for a real treat. Properly trained, pugs can be the most entertaining house dog any person could have. The dog in our video is one such pug.

Angel is a properly trained little pug who loves to play with her human dad. One day, dad decided to take a video of her doing some tricks. To get her to do that, he had to put her favorite thing in front of her as a motivation: a bag of treats.

The video started with dad and Angel facing each other, with the lovable pooch sitting on the floor. Dad told her to stay in her position as he took the treats away from her, placing it within an arm’s reach. Here’s where the fun began.

First, dad told Angel, “Lay down,” prompting her to lie on the carpet. He then told her to “roll over,” causing her to roll like a hotdog in a pan.

Next, dad had her sit, but because she wanted to lie down, dad instead told her to “play dead.” Angel, as playful as she is, snorted then pretended to be dead! After this, dad called her to get up from the floor to shake his hand.

After this, dad said, “Up.” Angel then went up to sit on her butt. She was still sitting that way when dad told her to “speak,” and she barked in response.

Dad kept telling Angel, “I wuv you,” as if to tell her what he wants to hear from her. Interestingly, while it was obvious she wanted to say, “I love you,” her barks sounded like “I want food” instead.

Dad was pleased with Angel’s obedience. He then told her to get ready for the last trick: the “nose.” This trick required Angel to do her best to resist one of the most enticing things in her life: food.

“Nose,” dad told her as he took out a treat from the bag. “Nose,” he said as he carefully placed the treat on Angel’s little nose. “Stay,” he said as he wanted her to wait for his permission to eat. All of this happened quickly, but it’s very amazing to see.

What’s even more amazing to see is what Angel did when dad finally said, “Okay.” She quickly pulled her head back to drop the treat, and within a fraction of a second, grabbed the treat with her mouth!

Pugs may be hard to train, but Angel is proof that they can be taught. See her video below.