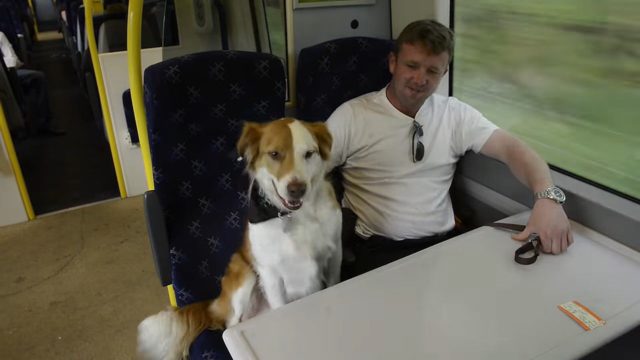 There is this pooch who is an escape artist, a tracker, and a commuter. This dog did all that so he could be with his owner. A constant companion does want to be with the one that they love all hours of the day. The pooch could have possibly also felt lonely when his owner left for work.

However, this dog did something that is trail-blazing! During his train ride to work, Thomas McCormick was surprised when his doggy, Paddy, sat down right beside him. Paddy, a four-year-old Collie-Labrador, escaped from his house to join Thomas on the commuter train!

According to the neighbors, Paddy used the trampoline to be able to jump over a six-foot-high wooden fence. He bounced on the trampoline, using it to aid in his escape. What an intelligent and agile dog!

This dog followed the scent of his owner through the streets to get to the train station. Paddy was able to board the same train cab as his owner. Then, Paddy sat down next to Thomas. It was such a surprise for Thomas to see his dog seated beside him!

Thomas decided not to bring the dog back home. Paddy joined him, enjoying the commute. Thomas ended up having to bring the dog to work, but he wasn’t angry at all. It was a pleasant surprise for Thomas to be with Paddy!

Watch how Paddy used his canine skills to join his owner for a train ride to work!