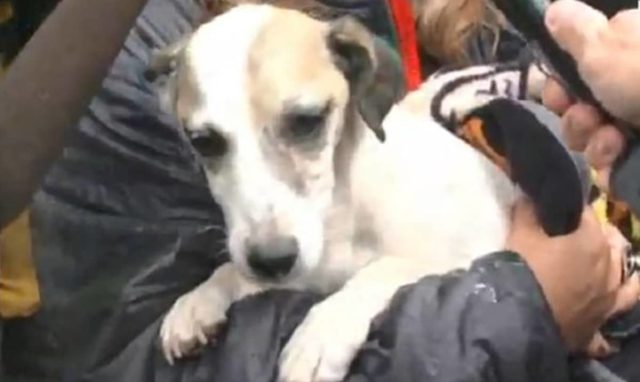 There is an animal shelter in California that trains seeing-eye dogs. They ended up with a black lab they named Pearl. Part way through training and testing they realized Pearl was not well-suited to be a seeing-eye dog. She had far too much energy and support dogs need to be calm and settled.

Somehow the National Disaster Search Dog Foundation heard about Pearl and thought she’d be perfect because search dogs MUST have excess energy. The foundation was established in 1996 with the goal of assisting with disaster responses by rescuing and training dogs to partner with various first responders. The dogs are specially trained to find people who are buried alive in all kinds of wreckages.

Once Pearl was well-trained, she was sent to Haiti in 2010 after it was hit with a 7.0 magnitude earthquake. Here, she crept into collapsed buildings through gaps of rubble that were too small for human rescuers. She was among three dogs who, after five days, found a woman in a collapsed building. She was still alive though missing some fingers. Later, she helped with rescue efforts in Japan after the tsunami in 2011.

Her handler, Ron Horetski, explains that Pearl is a work dog and thus doesn’t get to sit around the house on his lap watching TV. They don’t go out for runs, because that would run the risk of her being exhausted right at the time she needed in an emergency. Still, he doesn’t think of her as a pet. He calls her his partner.

In November 2010, Pearl and Capt. Horteski were honored in New York by ASPCA’s Humane Awards Luncheon in one of six award categories. The event included a video montage of Pearl in her handler in action. Approximately 400 people attended the event.

Capt. Horetski takes great pleasure in the idea that a rescued animal can become a rescue animal.