Home Dog Edge One Boy Wrote And Illustrated A Book To Raise Funds For His...

Unlike other children, Evan was born with a condition called tuberous sclerosis which causes tumors to grow in different organs including the brain, and then triggers life-threatening seizures. And Evan had been battling it for seven years at the time. Then at one point, he suffered around 300 to 400 seizures in a month because it just got too intense.

He then had surgery to take out a tumor and the seizures stopped temporarily. But when it came back, it would happen every night. So, Evan had to sleep with his parents so that they could immediately administer emergency medications when needed.

But the routine was practically tiring, so Evan’s parents turned to 4 Paws for Ability, a nonprofit that provides service dogs to children. They wanted to get Evan his own service dog that would alert them whenever there was an incoming seizure. But it would cost them $22,000 to get him one and so to help the family, the organization was willing to offset $9,000 but they still had to pay $13,000.

So, to raise funds, Evan decided to write and illustrate a book about how it would be like to have his own seizure dog. He self-published the book and sold each for $10. He sold out all of his books in a successful book signing event and he earned more than enough to buy one. And so to help other kids like him who need their own service dogs, they decided to donate the rest to the organization. 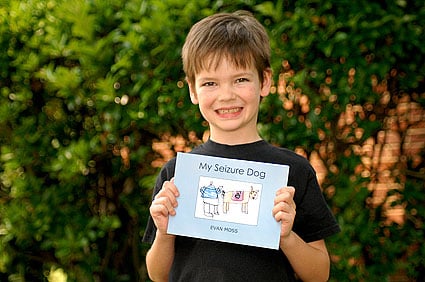 After a year of waiting, Evan finally met Mindy. They had to drive all the way from Virginia to Ohio to get her. At first, Evan found it hard to communicate with Mindy since she didn’t really listen to him. But eventually, the two got along and he was able to teach Mindy a lot of new things like climbing up into his swing set.

Sometimes, he worried about his seizures but he didn’t think too much about it because Mindy was always there to help him. And now, even with epilepsy, Evan was able to do a lot of things even extraordinary ones like riding a zip line. He was more alive than ever.