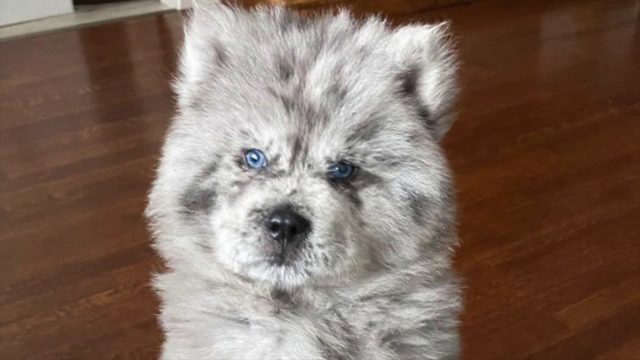 You don’t think that this adorably fluffy pup that has been going viral on social media will grow up to become an 85-pound hulking pooch when you look at him. But you may be surprised how big this pup would be in just a few months! In fact, this little Chow Chow does not look at all like other dogs of his breed. But anyone who has seen his pictures online is left gushing and falling in love with how incredible he is – a truly one of a kind doggie.

Sarah Hamilton’s Chow puppy named Chief has become the latest dog to make a name for himself on social media. One of the reasons for this is his fluffy multicolored fur in varying shades of white and black. His fans online have already nicknamed the pooch “Oreo Cloud” since this cuddly furball will remind anyone who sees him of an oreo Mcflurry made of fluff.

Chief was born a marle dog, which means that his coat of fur is multicolored due to the mixture of his parents’ genetic pigmentation. The puppy is gorgeously covered with gray and white fur interspersed with spots of black. He has also happened to have the bluest eyes that you would ever see in a Chow chow. Some may even mistake him for an Australian Shepherd or a Husky.

Not just the looks

This unique pup has already made an impact in his community – not only because of how he looks! It is due to how loving he is towards children in need of comfort. This pup tags along with his mom when she volunteers at her local foundation that cares for children with medical issues. He was a natural as he took on the role of being a support dog for the kids he met there. He is now in training to become an official service dog and is planning to continue spreading cheer to as many people as he can.