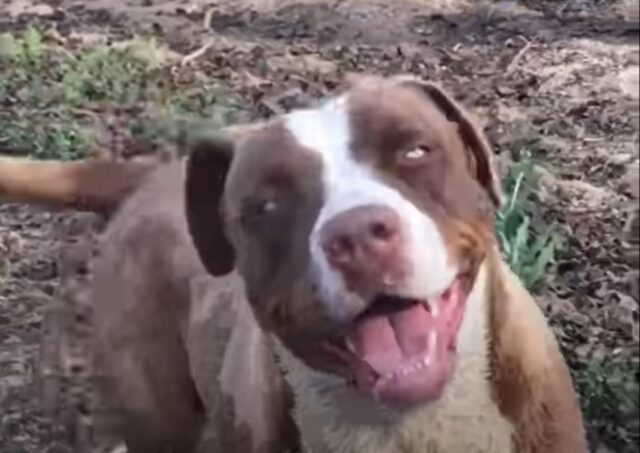 Danny Spanks came across a post about an abandoned Pit Bull in a big empty farming field. Danny recalled that the original poster who found the dog named Mama said she was a nursing mom who was dumped without her puppies.

Danny went to where Mama was wandering around and immediately familiarized himself with the area. Danny saw how pitiful Mama was, so he decided to involve himself in rescuing Mama.

Danny recalled that when he saw Mama for the first time, he knew that gaining Mama’s trust would take a lot of hard work. Mama kept on running away whenever Danny tried to approach her, so he visited her every day in the fields because he wanted Mama to get used to him being around her.

Danny always sat in the middle of the empty field while tossing food to Mama because he wanted her to get closer to him. Danny shared that Mama must have realized that he was her source of food because she started following him wherever he went.

Danny knew that Mama wanted to trust him because she always sniffs his back and crawls to get close to him, but she could not because of her trust issues. Danny decided to build a huge trap in the middle of the orchard to catch Mama.

Danny tried getting Mama accustomed to the trap’s presence by going in the big trap and feeding her from the inside. Danny successfully caught Mama and immediately got her out of the fields safely.

Danny felt so overwhelmed after being able to pet Mama for the first time in four months. Danny decided to adopt Mama for good because of how attached he became with the Pit Bull.